Whether you’re a basketball fan or not, it’s been next to impossible not to notice and be inspired by the meteoric rise of Jeremy Lin of the New York Knicks. Starting on February 4th where he came off the bench to score 25 points against the New Jersey Nets, through today’s all star worthy performance where he had 28 points, 14 assists and five steals against the defending NBA champion Dallas Mavericks, he has become one of the most talked about athletes on the planet.

Nowhere as the conversation about Jeremy Lin been more rabid than in the world of social media. Through today he’s got approximately 460,000 followers on Twitter, 845,000 likes on Facebook and if you search “Jeremy Lin” on YouTube the first five videos that show-up have almost 12,500,000 views combined! Additionally, TweetReach has tracked 1,498 tweets around the hash tag #linsanity and #1,486 around the hash tag #jeremylin.

Of course traditional media has been all over this story as well, but this week Sports Illustrated (SI) did something that in my opinion took the integration of social and traditional media to an entirely new level. They decided to feature their own branded hash tag, #silinsanity, right on the cover of the February 20th issue featuring Jeremy Lin. 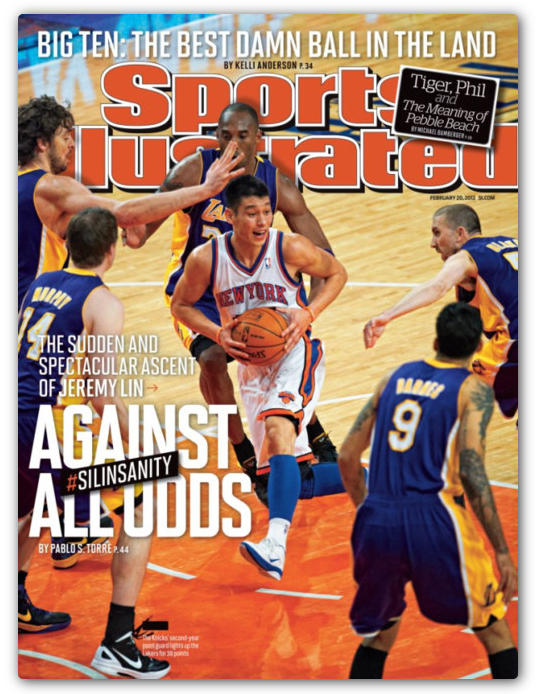 While featuring hash tags within traditional media, be it broadcast or print, is nothing exceptionally new, it’s the manner in which SI did so that makes it very unique in my opinion. The hash tag was not relegated to secondary page real estate, but rather integrated right into the core messaging promoting the feature cover story. In doing this SI not only was telling its readers to open the magazine to read the article, but to also go online and join the conversation via Twitter. With a weekly net paid circulation of 3,150,000 that is pretty powerful social endorsement, and I’m sure when you take into account the number of newsstand and pass along impressions, that number is actually much higher.

I have to say that I applaud SI for the move that they have made here, as it truly illustrates the importance of integrating social media into your other media and marketing vehicles. As social media marketers, this is one of the key tenements that we must preach to our clients…that social media is not an island until itself, rather it’s something that should touch all of your communications vehicles. While Facebook, Twitter, YouTube, LinkedIn, Google + and most recent Pinterest are all key social media properties, to think of them as the only components that should influence your social media strategy is just missed opportunity. As the below graphic illustrates, social is really something that can impact and influence all of your marketing touch points, and likewise these elements can also influence your core social channels. As SI clearly has demonstrated, by prominently integrating the #silinsanity hash tag on the cover of this week’s issue, they are clearly invested in Twitter and realize its value. They understand that social media is about creating and driving social conversation, connecting with your audience and using both traditional and non-traditional assets to do so. In their print publication they realize that they have a truly powerful asset and brand, and to not leverage this would be a missed opportunity.

While there have been some that have decried this most recent move by SI as blasphemous to its cover, claiming that it’s “sacred ground” and no place to introduce a hash tag; my marketing mind says that these people clearly “don’t get it”. In today’s world, social media is everywhere and if you want to be at the forefront of it you need to leverage all of your available assets to take the lead. Therefore, its important you take stock of all the assets you do have and assess how social can be integrated into them.

Again, I want to applaud SI for what they have done here. I can only hope this will encourage more organizations to realize that social media marketing is not just about Facebook, YouTube, Twitter and others, but rather it’s about communicating and engaging with your target and leveraging all of your available marketing and communications touch points in order to do so.